This guest post comes to us from Board Member G.W. Rolle who works with Pinellas County Coalition for the Homeless in Florida. 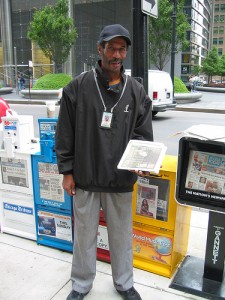 Over a week ago now, the St. Petersburg City Council passed an ordinance outlawing all roadside solicitation.  The ordinance was passed with a unanimous vote, and has been met with praise from several council members and area residents alike.  Unfortunately, few seem to realize the far-reaching effects this law would have on the St. Petersburg population.  The language of the ordinance does not distinguish types of solicitation, and would therefore outlaw the selling of newspapers at traffic intersections or even the fire department’s annual fundraising for muscular dystrophy.

The ordinance amounts to yet another instance of the criminalization of homelessness – where street vendors (often homeless) are punished for carrying out behaviors necessitated by their economic situations – and the implications are far reaching.

If council members stopped thinking of homelessness as a crime, they could begin looking for solutions to the problem, such as affordable housing.  City councils should embrace ordinances that promote constructive engagement and dismiss those ordinances that merely dismiss the homeless. Housing is a human right. But when housing is not available, the solution is not to punish those who are without it.

This entry was posted in Civil Rights and tagged Civil Rights, homelessness. Bookmark the permalink.