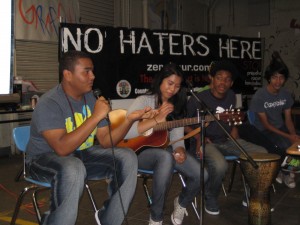 They say “from the mouths of babes comes the truth,” and today I was blown away by the brilliance of youth.  The LA County Commission on Human Relations has brought together a group of youth with record producers and Grammy award winning artists to write songs with a positive message, and they have formed a group called “The Bricks.”  Moved by the stories of homeless persons being burned alive, two of the youth, Maria Tuadi and Tevin Douglas composed “Deaf,” a touching song that humanizes all-too-often dehumanized victims of such violence against homeless persons.  They performed this song today for an audience of human rights activists, and more than just my eyes teared up at the refrain calling our attention to “silent cries at night.”

This song comes at a critical time in California for taking steps to help protect homeless persons from violence.  Following the lead of Maryland and the District of Columbia, California’s Assembly just passed AB 2706 which would add homeless persons to the list of protected groups under hate crimes laws.  This is a sign of the growing awareness of violence against homeless persons, but unfortunately that awareness comes as these cases increase in number and severity. In just the past few weeks, a homeless man in Virginia barely survived being set on fire, a disabled homeless man in South Carolina was beaten to death, and a homeless man in Michigan was shot in the face with a paintball gun and lost an eye.

California’s senators need to hear from constituents that no person deserves to be treated as less than human, and to pass AB 2706.  And Californians and all Americans need to hear this song and be touched by the brilliance of youth.