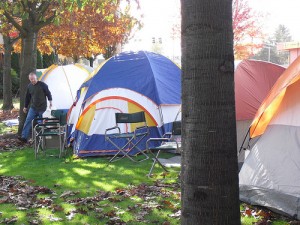 The Law Center applauds three County Commissioners from Charlotte County, Florida, for voting against a proposed anti-lodging ordinance yesterday that would have further marginalized the County’s homeless population.  The anti-lodging ordinance would have prohibited homeless persons from sleeping outside in public spaces anywhere in the county. In a time when these kinds of measures seem to be cropping up all around the country, the rejection of this law is something to celebrate.

The Law Center was part of a coalition of groups, including the Charlotte County Homeless Coalition and the National Coalition for the Homeless, that successfully advocated against the proposed law.

Cities truly need to wake up to the reality of the counterproductive nature of these laws.  Not only do they frequently violate homeless people’s civil rights, but they do nothing to further the goals of cities in getting people off of the street.

No one thinks it is a good idea for human beings to have to live on the streets or in places not meant for human habitation.  But, cycling people in and out of jail and back to the streets does nothing to help them move out of homelessness.  In fact, arresting or citing homeless people under these types of measures only perpetuates their homelessness, as obtaining housing and employment can be more difficult once a person has a criminal record.

In this time of budget crises around the country, communities need to consider the costs of their actions and use their resources more intelligently. According to a nine-city survey of shelter, housing, and jail costs, jail costs are 2 to 3 times higher than providing housing.

While the trend toward criminalizing homelessness has been ongoing for the past couple of decades, decisions like the one yesterday in Charlotte County provide a ray of hope. Let’s hope that more cities will follow their lead in rejecting these very counterproductive measures.