Lessons from Around the Globe – Part II

Posted on September 16, 2010 by homelessnesslaw 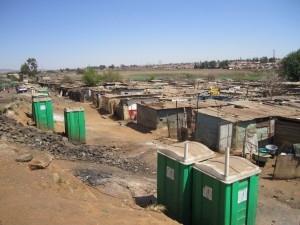 Today was an incredible, inspiring, heartbreaking day of site visits to three key sites for the movement for housing rights in South Africa: an active squatters building, two buildings where squatters have been relocated, and an informal shack dweller settlement in Kliptown, in the Soweto suburbs of Johannesburg.  Though there’s so much I wish I could share, for now, the lesson for today is: litigation can achieve huge victories in protecting the human right to housing, but it will require much more to see the right fulfilled.

Our first visit was to the 115 Main Street building in downtown Jo’burg, where three floors of a former garage have been turned into dark warrens of essentially indoor shacks constructed of plywood, metal, and fabric.  The approximately 120 residents, including 20 families with children, live without running water or regular electricity, and were threatened with eviction by the building owner, who wants to upgrade this building in a gentrifying area.  Because of South Africa’s phenomenal constitutional protection of the human right to housing and the supporting Prevention of Illegal Evictions Act, local lawyers were able to stop the eviction until the city proposes alternative accommodations for the residents. 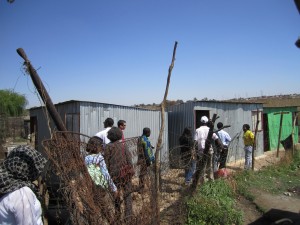 Our next visits were to the MDV and Old Perm Buildings, two sites where residents previously squatting in conditions similar to the above Main Street building were relocated after the city threatened them with eviction, but a lawsuit created the protection used in the Main Street case, namely that the city had to engage the residents in “meaningful dialogue” including proposing alternative accommodations.  However, residents reported the MDV alternative, while providing some improvement and legality, is still far from adequate.  Although the building was only renovated two years ago, frequent leaks, poor plumbing, and faulty stoves create hazardous conditions, and the disruption of the previous community governance system with self-enforcement of discipline and regular cleaning has led to a deteriorating social and physical environment.  The Old Perm building was marginally better physically, but still lacked the community accountability present in their previous homes. 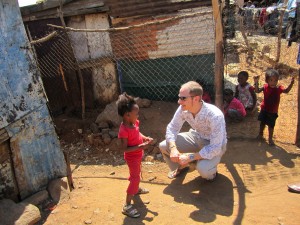 The final visit was to Soweto, where shack dwellers live in completely unsanitary conditions, and are constantly threatened with displacement.  One day, eight families went out to their jobs, and when they returned home, their shacks were torn down, their belongings strewn about outside. An urgent action was filed with the court, and the court actually ordered the police to rebuild the shacks – even though the residents never owned the land to begin with.  When, after 7 days only 3 of the 8 shacks were rebuilt, attorneys returned to court, they got an additional order, and the remaining homes were rebuilt in 2 days.

So here in South Africa, they have eviction protections we only dream of in the U.S. – cities required to propose alternative accommodations before people are evicted into homelessness; police ordered to rebuild homeless encampments despite their illegal status.  But at the same time, none of this housing that we saw people protected in is actually adequate.  So while litigators could make great strides by advocating for similar protections for the security of tenure of residents here in the U.S., we also need a multi-faceted social and policy movement to ensure at the end of the day, the full right to adequate housing is fulfilled.