The Path to Advocacy

Posted on October 7, 2010 by homelessnesslaw 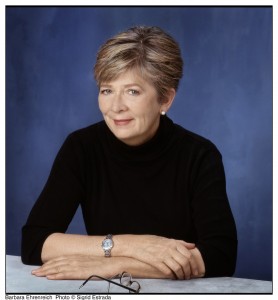 In the run-up to next Thursday’s McKinney-Vento Awards, we’ll be featuring a series of posts on our honorees and distinguished guests.  Make sure you keep checking back!

When you’re young, you have a pretty good idea of where you want to go, even if you don’t know how to get there.  But the path ahead is full of bends and switchbacks, and sometimes it’s for the better.

Barbara Ehrenreich studied chemistry, biology, and physics at Reed College, earning a PhD in cell biology in 1968.  But pursuing a scientific career didn’t quite feel right.  Barbara’s makeup had been permanently altered by her participation in the anti-Vietnam movement, and as a result, she ultimately became a social activist.

Writing wasn’t something she studied, or something she imagined doing when she was younger.  But it was a natural component of her activism, and she grew to love doing it.  Through the years, Barbara’s work has been published in Time Magazine, the New York Times, The Progressive, Mother Jones, and The Atlantic Monthly, among many others.

In 2001, Barbara published Nickel and Dimed: On (Not) Getting By in America, which measured the traditional view that “a job will defeat poverty” against the realities she encountered during two years of investigative reporting.  From Florida to Maine to Minnesota, she took low-paying jobs as a waitress, hotel maid, house cleaner, nursing home aide, and Wal-Mart salesperson.  What she found was good people doing hard work – usually at more than one job, just to avoid living on the street.

The economic crisis has only worsened things, as more and more poor people slide into homelessness.  Barbara’s 2009 op-ed – titled “Is It Now a Crime to Be Poor?” – drew attention to the disturbing trend of criminalizing homelessness.  Cities are making life-sustaining acts like eating or sleeping illegal.  In the op-ed, Barbara tells the story of a man charged with criminal trespassing for sleeping on a sidewalk.  When he didn’t show up for his court date, he was dragged out of the shelter where he was staying and put in jail.

Barbara’s ability to put a human face on social realities has helped establish her as one of the nation’s most powerful voices on poverty issues.  It’s a long way from cell biology, but the American dialogue is richer for it.

We hope you’ll join us when we honor Barbara at our 12th Annual McKinney-Vento Awards on Thursday, October 14, at 6 pm.  Dechert LLP, the Education Law Center of Pennsylvania, and the formerly homeless Elzer family will also be honored.  The evening’s keynote address will be delivered by U.S. Secretary of Housing and Urban Development Shaun Donovan.

Click here for more information and to purchase your tickets.

This entry was posted in Uncategorized and tagged Civil Rights, McKinney-Vento Awards. Bookmark the permalink.

One Response to The Path to Advocacy