Posted on November 24, 2010 by homelessnesslaw 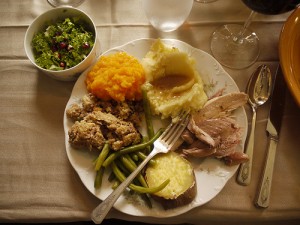 With Thanksgiving now just hours away, most Americans are busy preparing for their most elaborate meal of the year.  Conversations at home and around the office are focused on food; we’re all talking about pie recipes or that timeless canned-versus-fresh-cranberry debate.

But while this is the beginning of a joyful holiday season for some of us, it is a painful time for the millions who are struggling to feed their families.  And there are more hungry Americans than ever.  Earlier this month, the U.S. Department of Agriculture released its most recent data on the Supplemental Nutrition Assistance Program, or food stamps.  These numbers show that over 42 million people—14% of the country—rely on the SNAP.  Use is up nearly 60% since the beginning of the recession, as families that have never before relied on government assistance now view food stamps as a lifeline.  The Wall Street Journal recently reported on a sobering trend of 24-hour grocery chains experiencing a “midnight rush” on the first of the month, minutes after electronic food stamp cards are replenished and families can afford to stock their pantries again.  As one Wal-Mart executive noted, “The only reason someone gets out there in the middle of the night and buys baby formula is that they need it, and they have been waiting for it.”

While food stamps are the most popular assistance, largely because they do not have an age limit, SNAP is not the only program that has grown to meet the needs of newly poor Americans.  The federal WIC Program for women, infants, and children saw its annual enrollment edge up 7% nationally last year.  The National School Lunch Program has seen participation reach record levels, not only for free and reduced-price lunches, but also for newer programs to provide breakfast, after-school snacks, and summer meals.  Here in Washington, D.C., where over one-fifth of the population is on food stamps, the D.C. Public Schools recently began serving three meals a day to students in an effort to improve access to nutrition and curb hunger.

I share these facts not to cast a shadow on your own Thanksgiving celebration, but to remind readers that many of our neighbors are experiencing yet another season of hunger.  But there are steps that we can take to combat hunger in our own communities. First, the Child Nutrition Bill is stalled in the U.S. House of Representatives, having passed the Senate. While the Senate chose to fund part of the bill by proposing to cut future food stamp benefits – a short-sighted decision at best – advocates are still supporting the legislation because the White House has pledged to make sure the potential food stamp reductions never go into effect. Please call your House members next week and ask them to pass the Child Nutrition Bill immediately, now that they have had their Thanksgiving dinners. Second, your local food pantry or shelter may need volunteers during the holidays.  Demand at pantries has surged this year. Finally, take the opportunity of having friends and family gathered around the table to bring up some of these important issues.  You’ll be thankful that you did.

This entry was posted in Hunger and tagged children & youth, holidays, hunger. Bookmark the permalink.

One Response to Thanksgiving Hunger