The Injustice of Veteran Homelessness

Posted on November 10, 2010 by homelessnesslaw 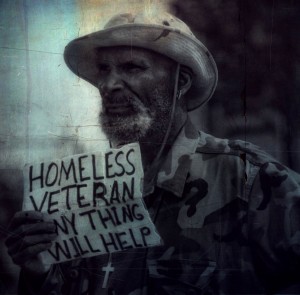 I have a friend, Al, who served in the U.S. military for several years. This was decades ago, but he can often be seen wearing a VFW jacket or a ball cap commemorating one of the wars in which he served.

I met Al in a homeless shelter. He’d struggled with homelessness on and off for five years, and he could never quite seem to make it through the Veterans Administration bureaucracy to get the benefits he needed to stay housed. Until recently.

Through the perseverance of the shelter’s dedicated staff and volunteers, and through new outreach by the VA, Al and his son now live in a townhome, sheltered from the elements. He no longer has to curl up on the church steps where he’d slept for so many nights.

Nearly 1 in 4 people experiencing homelessness in the United States is a veteran. And these are not all Vietnam or Korean War vets;  veterans returning from the conflicts in Iraq and Afghanistan, including female veterans, are finding themselves on the streets.

Veterans are a big focus in the U.S. Interagency Council on Homelessness’s new federal plan to end homelessness. Secretary of Veterans Affairs Eric Shinseki has made a commitment to end veteran homelessness in the next 5 years.

On Tuesday, the Interagency Council held a webcast on veteran homelessness. You can view it here to learn more about what the federal government plans to do about this tragedy.

I have a photo on my desk of Al to remind me why it’s so important to persevere in our efforts to end homelessness. As we observe Veterans Day this year, we at the National Law Center on Homelessness & Poverty are deeply aware of the injustice of homelessness among those who have served our country in the military. We remain committed, as always, to work toward a United States where homelessness is a thing of the past – for everyone.

This entry was posted in Veterans and tagged federal plan, homelessness, USICH, veterans. Bookmark the permalink.

4 Responses to The Injustice of Veteran Homelessness