Journey to Alaska? You Betcha!

Posted on December 17, 2010 by homelessnesslaw 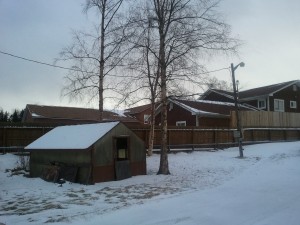 I recently had the privilege of taking what might be the longest domestic trip ever undertaken by a Law Center staff member – a pilgrimage to Anchorage, Alaska to participate in the annual conference of the Alaska Coalition on Housing & Homelessness.  I was warmly welcomed by the dynamic and hard-working conference organizers, Kris Duncan with the State of Alaska and Suzi Pearson who runs a nonprofit focusing on domestic violence, and by their colleagues – really in all ways, except by the zero degree temperatures.

Why did I accept the invitation?   I wanted to find out what homelessness was like in Alaska.  Would it be different than down here in the “lower 48?”  What were the challenges of addressing homelessness in a state where weather conditions can be brutal all year round?  I learned the answers to these questions and others.

In some ways, Alaska has it tough.  Many people have a frontier mentality – a belief that everyone should get by on their own.  This causes some people in need to not seek assistance, and it results in many citizens not being supportive of government investment to help end homelessness.  And as a state with many low population cities, Alaska sometimes struggles to provide even temporary shelter to homeless people. Due to lack of volunteer staff resources, the cold weather shelter in Nome only opens when the temperature dips lower than ten below zero – in a community where anyone sleeping outside in the winter risks death.  Plus there are transportation concerns – one Alaska school district transports homeless children four hours a day.  That’s a lot of time for anyone to spend on a bus, and it’s logistically challenging for the school district.

But Alaska’s also got a lot of advantages – it’s got wonderful and caring people who work on this issue, like Kris and Suzi, and like Dave Mayo-Kiely and Barb Dexter in the Anchorage public schools.  And as a low population state, where “everyone knows everyone,” collaboration can be easier.  Plus, thanks to high oil prices and a good amount of federal government largesse (Alaska gets back nearly two dollars for every tax dollar it sends to Washington), Alaska is one of the few states that currently has a budget surplus.  Unfortunately, so far the state hasn’t expressed interest in devoting significant new resources to this issue – but with hard work from the Coalition, maybe that will change.

I did go to visit one Alaskan with a big huge house, and a great deal of money – former governor Sarah Palin.  I even took a picture (above)!  It was cloudy when I drove to Wasilla, so I couldn’t see Russia.  And I didn’t see the former governor either.  But if I had I would have challenged her – Alaska’s got a lot of money and a lot of land – couldn’t she help put those things together and make sure that all Alaskans have a safe place to live?  My answer?  You betcha!