Posted on February 22, 2011 by homelessnesslaw 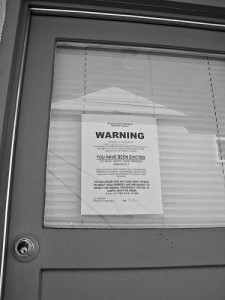 February is Black History Month, and though the Law Center is mindful of how race intersects our work all year ‘round, I’d like to take the opportunity afforded by the holiday to blog about one particular aspect of race and housing law.

The foreclosure crisis has claimed nearly five million homes in the last four years, and almost no community has escaped unscathed.  From inner city Detroit to rural Idaho, homeowners to apartment-dwellers, foreclosures have affected Americans from every walk of life.  But there can be no denying that the crisis has had a disproportionately negative effect on communities of color.   According to the Center for Responsible Lending (CRL), about 8% of all African Americans and Latino homeowners lost their homes due to foreclosure compared to only 4.5% of whites, even though white homeowners account for 2/3 of the market.  These homeowners not only lost the place they lived, they most likely lost their greatest asset and sustained serious damage to their credit and financial stability, costs that only add to the wealth gap between the races.

The well-documented “spillover” effects of foreclosure—including vacancy and blight, plummeting real estate values for families able to remain in their homes, and increased crime rates—will continue to be felt more widely in African American and Latino neighborhoods, which CRL estimates will lose close to $200 billion in property values by 2012.  And 40% of Americans at risk of losing their homes due to foreclosure are renters, a group where low-income people of color have always been overrepresented.

What is behind these troubling numbers? African Americans and Latinos had less access to traditional “prime” loans, and turned to or were targeted by so-called “subprime” lenders.  The subprime loan market offers more complicated and riskier products,  is less transparent, and incentivizes the sale of risky loans. Subprime loan originators specifically targeted African American and Latino communities, stepping into a market that conventional lenders had ignored and aggressively marketing loans to borrowers who had little access to alternative options.  Regulators charged with the responsibility for enforcing the Fair Housing Act and Equal Opportunity Credit Act, the major federal laws outlawing racial discrimination in the housing and lending markets, essentially ignored complaints, investigating only a handful of cases from 2000 to 2009, despite ample evidence of lender misconduct.

While the direct impact of the foreclosure crisis continues to ravage minority populations, a brand new study from ComplianceTech shows that its indirect effect on the wealth opportunities available could continue to be damaging far into the future.  The study, based on Federal Reserve data, shows that the credit available to African American and Latino borrowers has plummeted over 60% from 2004 to 2009, compared to a 17 percent drop for whites.  Author Maurice Jourdain-Earl warns that a “dual mortgage market,” one where black and Hispanic borrowers have limited access to credit outside of the subprime market, is placing “the economic foundation of the African American and Latino communities…at risk of total collapse.”

Black History Month should be a time to celebrate the achievements of African Americans, but also to acknowledge that communities of color face ongoing challenges. These challenges will only be corrected if private industry and federal regulators work with local communities to identify and stamp out these predatory practices and systemic inequities.

This entry was posted in Housing and tagged foreclosure, holidays, Housing, race. Bookmark the permalink.

3 Responses to Race and Foreclosure