Posted on February 11, 2011 by homelessnesslaw 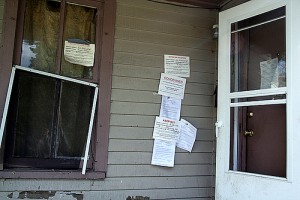 In a previous legal internship at Neighborhood Legal Services Association in Pittsburgh, PA, I specialized in representing low-income tenants in housing cases. From the beginning, I was eager to take on landlords, who I saw as the evil oppressors of low-income people in our society. As college students, my roommates and I had our share of injustices as renters, and I was convinced that landlords played a huge role in the current hardships facing poor Americans. I marched into courtrooms, guns blazing, only to be hit with the reality that most judges had no qualms about evicting people. No matter how sympathetic my client’s story or how egregious a landlord’s behavior, the law was usually not in the tenant’s favor.

I quickly learned that there are two sides to every story, and that some landlords were hit just as hard by the current economic crisis as their tenants. Now, I am seeing further evidence of this through my work at the National Law Center on Homelessness & Poverty. When contacting local housing advocates to identify violations they see occurring under the Protecting Tenants at Foreclosure Act, I am continually hearing about the high number of tenants being unlawfully evicted and forced into homelessness because of the numerous rental properties undergoing foreclosure.  Due to their landlords not being able to pay the mortgage, these tenants are feeling the trickledown effect of the foreclosure crisis despite never owning a home. In trying to reach the most beneficial outcome for my client, I realized that compassion for the landlord’s situation, along with a firm declaration of my client’s rights as tenants, often went a long way.

However, there were a few landlords that will always stick out in my mind as earning the reputation of the evil oppressors. One particularly vivid memory is a landlord who was making it nearly impossible for a tenant to retrieve her possessions after evicting her. He had already removed some of them from the property when I contacted him, and was refusing to allow her to re-enter her home, despite her legal right to do so.  Even after we worked out a mutually agreeable time for her to re-enter the property, he kept rescheduling and continued to be quite difficult. I am unsure whether she was ever able to retrieve all of her possessions. Pennsylvania case law calls for reasonable accommodation in this situation, yet this landlord’s behavior was anything but reasonable.

A few days ago, one of my supervising attorneys from Neighborhood sent me a newspaper article reporting that the very same landlord had been indicted for mortgage fraud. According to the Pittsburgh Post-Gazette, he and his business partner had purchased dozens of foreclosed properties and quickly sold them for a high profit by persuading customers that they could qualify for mortgages immediately without making a down payment. In order to secure loans for these buyers, they submitted paperwork to banks with fake down payments and figures that overstated the buyers’ assets.  Federal agents believe that he and his partner pocketed millions of dollars from the scam, money they used to finance their own expensive homes, international travel, and lavish lifestyles.

Although I knew from personal experience that this landlord was unsympathetic to people who are struggling, I was still shocked to learn the extent to which he was profiting from deceiving his customers, while refusing to allow my low-income clients to retrieve their belongings after an eviction.

I am so grateful that at the Law Center I have the opportunity to advocate for systemic reform on the issues that continually faced my clients at Neighborhood Legal Services, while working to stop people who exploit someone’s need for a home for their own financial gain.

This entry was posted in Housing and tagged foreclosure, Housing, media. Bookmark the permalink.