When There’s No Alternative: Rights to Water & Sanitation

Posted on February 25, 2011 by homelessnesslaw 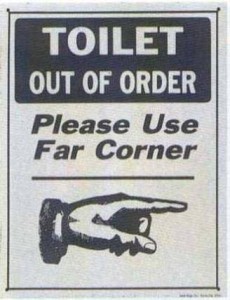 What’s something we do each day, but rarely think about, let alone discuss in public?

Going to the bathroom.

But when you’re homeless or poor, what most people take for granted can be a huge challenge, even a life-altering decision.

Forces beyond homeless persons’ control, such as lack of affordable housing and emergency shelter, compel them to live and take care of their basic human needs in public. When performed inside, these acts are unquestionably legal.  But cities are punishing homeless persons for the very same life-sustaining actions when they are forced to perform them in public spaces.

William Shumate, a 60 year-old veteran living in St. Petersburg, Florida, typifies the problems faced by many homeless persons. William has diabetes, which makes it difficult to control his urination, especially overnight when bathroom facilities are closed. St. Petersburg has local ordinances that prohibit public urination and defecation, but make no allowance for situations when public bathrooms are unavailable. On November 1, 2007, William was sleeping near City Hall when he woke up around 1:00 am with an uncontrollable need to urinate. Police followed him as he went around the side of the building, and arrested him.  William was sentenced to one day in jail and a fine of $300.

The impact of such criminalization goes beyond the immediate arrest and fines. A December 2010 study in Los Angeles’ Skid Row by the LA Community Action Network found that, as a result of disparate police activity against homeless persons there, 31% of homeless people lost social service benefits, 26.8% lost housing, and 16.9% lost employment. These increased barriers make it less likely that homeless persons will be able to access permanent housing, and more likely that they will be arrested for future violations.

On Wednesday, I offered this information in testimony to the UN Independent Expert on the Human Right to Water and Sanitation, Ms. Catarina de Albuquerque, here in the U.S. for a two-week mission.

The Independent Expert also heard testimony from others, like Catherine Coleman Flowers of the Equal Justice Initiative in Montgomery, Alabama. She told of a 27 year old woman with an autistic child, living on $12,000 a year of Social Security income, being threatened with arrest and separation from her child for failing to install a septic system that would have cost half her annual income.

While debtor’s prisons have been outlawed in most states since the 1800’s, this trend of holding individuals criminally liable for performing their basic human needs is on the rise. But it is our governments, at both the federal and local level, that should be held to account for their failure to meet their obligations to ensure the basic human rights of persons in their jurisdiction.

Ms. de Albuquerque will travel to Sacramento next week where she will visit a tent city and meet with homeless residents to see first hand the troubles they experience simply trying to survive. We’ll keep folks up to date on her travels and report on her findings at the end of her mission next week.

One Response to When There’s No Alternative: Rights to Water & Sanitation