Homelessness in the Land of Ahs

Posted on April 5, 2011 by homelessnesslaw 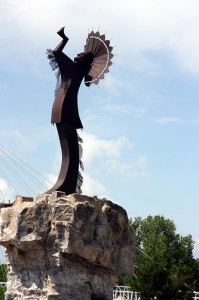 I grew up in Wichita, KS. The heartland. The land of Oz – or, if the local visitor’s bureau is to be believed, the land of Ahs.

Homelessness wasn’t something we talked about much. There was a small park downtown where we’d see someone sleeping on a bench, or carrying around lots of extra bags, but this was a rare sight. At least, it seemed like that.

Living in Washington, D.C. now, I see poverty all around me. In the man asking for change on the corner. In the women sleeping on the floor at the Metro station because they have nowhere else to go. In the family that’s wearing the same clothes they wore yesterday because they haven’t yet found a place to lay their heads.

Last week, my father sent me an article reporting that homelessness in Wichita had increased 65 percent since the recession began. Sixty. Five. Percent.

That means, on any given night, there are something like 600 people without homes in this small city in the heartland of America. A dozen of them died on the streets last year.

I wept, seeing these numbers, because Wichita is “home” for me. Behind each of these numbers is a man, woman, or child who lives there, but has no home.

And this is unacceptable, given that we know how to both prevent and end it. We lack not the solutions, but the political will to make sure all people are housed in these United States.

Join us.  Give. Learn. Share. Together, and only together, can we change laws, change lives, and end homelessness – in Wichita, in Washington, and everywhere in between.

This entry was posted in Housing and tagged homelessness, Housing. Bookmark the permalink.

One Response to Homelessness in the Land of Ahs