5 Years of Progress and Pain 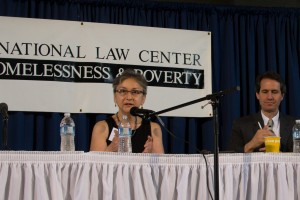 My first day at the National Law Center on Homelessness & Poverty was 5 years ago last Sunday. At that point, in the middle of 2006, our housing market was being celebrated as a boom, making huge profits for some, though we know that even in those supposed times of plenty, millions of people experienced homelessness each year, and as real estate prices increased, gentrification was forcing more and more people out of their homes.

But because the market was apparently making so many people winners, it was tough to make the case for those who were the victims of the market that the government needed to play a role in rebalancing the market or correcting for its failures. And at that point, the Bush Administration firmly denied that housing could be conceived of as a right, and was actively flaunting any notion that human rights standards should bind our behavior.

5 years later, we’re in a very different place. On the negative side, our housing boom went bust, forcing millions more families and individuals to struggle with their housing costs, suffer through poor conditions, and at worst, sending them onto the streets. On the positive side, President Obama has committed his administration to ending – not just coping with – homelessness, the Department of Housing and Urban Development has stated that human rights norms have a role in shaping our housing policy, and the State Department has brought us back into the international fold by affirming housing and other economic and social rights as rights.

While the reality for people on the ground remains grim, these are more than rhetorical changes. And they didn’t happen by accident. There has been a growing movement for the human right to housing over these past 5 years, and I believe that these initial changes are just the beginning for a new kind of housing policy, one that recognizes housing as a basic human right.

This Tuesday and Wednesday, we held our 6th National Forum on the Human Right to Housing, which was itself evidence of this change. 5 years ago, we would have been hard pressed to get a State Department official to talk about housing as a human right, let alone a domestic agency official. But this year, most of our panels had representatives from HUD, Justice, Veterans Affairs, and other domestic agencies, all of whom increasingly understand their roles not just as executors of policy, but as implementers of our human rights obligations. The more than 150 participants at the Forum from all across the country drew from a wide range of lawyers, advocates, and directly affected victims of the housing crisis, all ready to work together to promote housing as a human right. C-SPAN covered our closing plenary, moderated by author and journalist Barbara Ehrenreich, in which 3 formerly homeless individuals shared their stories and explained why they believe calling housing a human right is essential. And the Forum concluded with a briefing at the Capitol on a human rights analysis of the Federal Plan to End Homelessness, attended by dozens of Congressional staffers and interns, as well as other advocates.

In the next 5 years, I’ve got big dreams for implementing the human right to housing here in the U.S. Of course many of those dreams may not be realized, but if you had told me 5 years ago that we would have come this far already, I wouldn’t have believed it. So here’s hoping for the best, and looking forward to 5 more years of progress!