From the Lunch Counters to the Dining Room Table

Posted on July 1, 2011 by homelessnesslaw 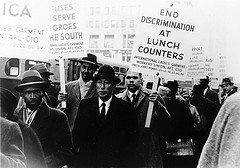 This week the New York Times caught on to a trend that’s sweeping the nation: as J.R. Fleming, co-founder of the Chicago Anti-Eviction Campaign who spoke earlier this month at our National Forum on the Human Right to Housing put it, “we…put homeless people into people-less housing.”

The article starts off with the scene of the Biggs family moving into their home, as supporters surround them and chant “fight, fight, fight, ‘cause housing is a human right.” While most families move on their own, or with the help of a few friends, the Biggs need the support of a group, the Chicago Anti-Eviction Campaign, because their move is not a traditional one – they don’t have a legal right to move in.

This forceful re-examination of the laws by which certain people are left out on the street even when there are countless empty homes in their communities is central to the notion of housing as a human right. During the civil rights struggle, people confronted the long-accepted laws of segregation and discrimination by challenging them in direct actions like sit-ins at lunch counters, as well as working through the courts and the legislatures. We are now engaged in the continuation of that struggle, as the Biggs and the Anti-Eviction Campaign take the first steps to say just because it’s the law, doesn’t mean the law is just.

The idea of housing as a human right doesn’t necessarily mean that every homeless family should be allowed to move into a vacant house and take that property away from its legal owner. But it does challenge us to look at the injustice of homelessness, and the laws that perpetuate it, in a new way. And there may be new models of community homeownership and renting that can co-exist with our present private ownership model that will provide the bridge to a more just future.

The Times article concludes with Ms. Biggs “showing off the freshly painted rooms and the used dining room set given to her by a neighbor,” and tonight, the Biggs will be enjoying dinner around their dining room table. I hope we will soon look back on this struggle to ensure that every family can share a dinner table in their own home the way we look back on the civil rights struggle to share lunch counters: a lesson for the history books, but no longer appropriate in an America that recognizes all its residents’ basic human rights.