Holy Allies in the Fight for the Human Right to Housing 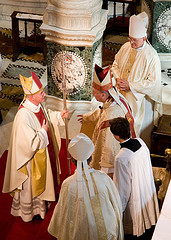 Earlier this week, the US Conference of Catholic Bishops (the Conference) sent a letter to the House of Representatives expressing their opposition to H.R. 2441, a bill which would eliminate the National Housing Trust Fund, which funds affordable housing programs.

The Conference’s opposition to this bill comes as no surprise, given their longstanding support for the Trust Fund, which originally passed in 2008. What may surprise some, however, is that the Conference frames this strong support for affordable housing in their affirmation that “Catholic tradition teaches that affordable and decent housing is a human right.”

Indeed, since at least 1975, the USCCB has explicitly addressed housing as a human right.  In “The Right to a Decent Home: A Pastoral Response to the Crisis in Housing,” the USCCB sets out their position, which is sadly equally relevant today as it was over 30 years ago. There, they state, “Since decent housing is a human right, its provision involves a public responsibility. The magnitude of our housing crisis requires a massive commitment of resources and energy.” As they then stated in their February 2011 brief on the Trust Fund, “Unfortunately, such a ‘massive commitment’ has not been forthcoming.”

The human rights framework is based on the premise that every human being is entitled to basic treatment to ensure their dignity. Whether that premise is grounded in religious, moral, or ethical terms, hopefully we can all agree that every person should have a safe, decent, affordable place to call home, and that where the market fails, the government should provide a structure to ensure that no one is left on the streets.

Unfortunately, this week the House subcommittee on Capital Markets and Government Sponsored Enterprises voted to pass H.R. 2441 eliminating the Trust Fund. Worse, they have shown no indication of proposing any policies that would replace it with a better system of ensuring that every American can enjoy their right to housing.

While religion is sometimes a divisive issue, the human right to housing is one of those shared values that can unite us.  We welcome the Conference’s support, and hope that Americans of all faiths will stand together to tell their congressional representatives that housing is a basic human right, and they need to take the steps to make that right a reality.