A Summer of Cuts

Posted on August 17, 2011 by homelessnesslaw 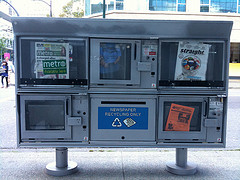 I chose an interesting summer to intern at the National Law Center on Homelessness & Poverty. Each morning on my way to work, I’d pick up a newspaper and read about the debt ceiling and deficit reduction and the need for an era of austerity. It was, without a doubt, a summer of cuts in Washington.

Then I’d arrive at the office, and I’d delve into material about a whole different set of problems. Nearly 2.9 million properties received foreclosure filings last year. Family homelessness increased by 20 percent between 2007 and 2010. On a given night 107,000 homeless veterans are homeless. And as anyone who was in the audience for the “Voices of the Streets” panel at June’s Human Right to Housing Forum can attest, behind each number is a real person with a real story.

Still, these facts and stories aren’t in the national discourse, despite the millions of Americans who suffer from homelessness each year. Updating the Law Center’s social media pages with links to stories about developments in homelessness policy and news could be difficult, and not because it’s tricky to condense swaths of information into 140 characters. News outlets don’t cover it like the human rights crisis it is.

The drive to reduce our debt isn’t an inherently negative development; although we may disagree strongly with how Congress and the administration have set about the task, $14.3 trillion is a lot of money.

But as my time at the Law Center has reinforced, it’s misguided to treat that debt as the country’s biggest concern (although if cynical politicians bring us to within days of a default, it unfortunately becomes so) when so many Americans face such real economic and personal hardship. Those afflicted by homelessness and poverty are part of this country; as such, homelessness and poverty deserve to be part of its policy debates.

The National Law Center on Homelessness & Poverty is grateful to all of its interns and fellows for their outstanding support this summer, including Heather Abraham, Julie Butner, Stefani Cox, Jeff Hill, Alex Knobel, and Kristen Tullos.