Being Poor Isn’t a Crime

Posted on August 2, 2011 by homelessnesslaw 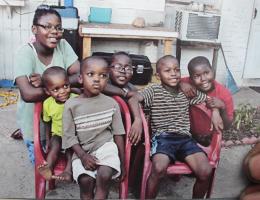 Prince Leonard lost his job as a welder.

After shuttling his wife, Charlomane, and their six children from apartment to motel to shelter, he finally found maintenance work at a storage facility and moved his family into a new home.  Three years later, the children had Bs or better in school and shared two computers at home.  The family planted a garden out back each summer.  There was nary a trace of abuse or neglect in this home.

On June 18 – the day before Father’s Day – Child Protective Services came to the Leonard house and, acting on an anonymous tip, removed the children.

The Leonards were living in a 10,000 square foot storage unit.  It held beds, a fridge, a microwave, and a tub – and even had air conditioning and a wood stove for heat.  Prince built shelves and a loft, and every day he filled a 55-gallon drum with fresh water for cooking, bathing, and the compost toilet.

Charlomane claims her children had food, clothing, and shelter as required by the Texas Family Code, that the storage unit “overflow[ed] with love,” and that her family was split up because they don’t fit CPS’ vision of a typical home.  CPS placed the children with their maternal grandparents and scheduled a hearing for mid-August, allowing Prince and Charlomane just six hours of visitation a week until then.

According to pediatrician Abraham B. Bergman, CPS investigations of physical or sexual abuse have been cut in half, and neglect – often linked with poverty – was the impetus for almost 75 percent of investigations in 2008.  Indeed, the Leonards believe their children were taken away because the family is poor.

The Leonards’ case drew national attention.  A public outcry led to the involvement of activists, who helped the Leonards find a home to rent.  The court date was moved up to July 20, after which the children were immediately returned to their parents.

Charlomane disagreed with CPS’ ruling that the home they’d made in the storage unit was unfit for children.  Of moving, she said:  “That’s what they wanted us to do, so that’s what we did.”

This story has a happy ending, but there are countless other poor families who live in fear of their children being taken away.  This is all part of a disturbing trend toward criminalizing basic human acts like sleeping, eating, or raising a family.  This does nothing to solve the problem.  The real solution to the Leonards’ situation was to help them access affordable housing – not take their children away.

It’s time to move past platitudes and rhetoric, and make the human right to housing a reality in this country.