Posted on September 20, 2011 by homelessnesslaw 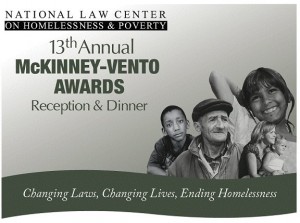 Each year, the Law Center recognizes outstanding contributions by individuals and organizations to the movement to end homelessness at its 13th Annual McKinney-Vento Awards. This year’s event will be held tomorrow, Wednesday, Sept. 21 at the L’Enfant Plaza Hotel in Washington, D.C.

For Rob Robinson, homelessness isn’t an abstraction; he’s lived it.  For almost three years, Robinson survived on the streets and in shelters in Miami and New York.  And since resolving his homelessness in 2007, he’s become a powerful voice for all those still suffering its indignities.  Working with Take Back the Land, Picture the Homeless, and the National Economic and Social Rights Initiative, Robinson has been a fierce advocate for the human right to housing. He has also been a leader in the Campaign to Restore National Housing Rights.  G.W. Rolle, a former honoree and Law Center board member,  will present Robinson with this year’s Personal Achievement Award.

Robinson’s work has been made possible, in part, by the U.S. Human Rights Fund (USHRF), this year’s Stewart B. McKinney Award winner.  Since its founding in 2005, USHRF has provided more than $20 million to nonprofits fighting for human rights here at home.  Making the Law Center one of its core grantees right from the start, USHRF has helped us change the way policymakers view homelessness.  In March 2011, following years of advocacy by the Law Center, Robinson, and others, the U.S. acknowledged for the first time that homelessness implicates its human rights obligations. Human Rights expert Dorothy Q. Thomas, who helped start the fund, will present the award.

Congressman Barney Frank, this year’s Bruce F. Vento Award winner, has fought time and again for legislation addressing and preventing homelessness.  In 1987, he helped pass the McKinney-Vento Homeless Assistance Act.  And in recent years, his leadership has been critical to helping enact the Homelessness Emergency Assistance and Rapid Transition to Housing (HEARTH) Act, Homelessness Prevention and Rapid Re-housing Program (HPRP), and Protecting Tenants at Foreclosure Act (PTFA).  He was also a primary sponsor of the Neighborhood Stabilization Program and the Dodd-Frank Act. Susan Vento, the Congressman’s widow, will present Rep. Frank with this award.

This year’s Pro Bono Counsel Award will go to DLA Piper, which has provided thousands of hours of pro bono support to the Law Center across a range of issues, most prominently access to education for homeless children.  DLA Piper is taking a national leadership role on the Law Center’s new Project LEARN (Lawyers’ Education Access Resource Network) initiative.  The firm will provide training and technical assistance on homeless children’s education rights to families and school officials across the country. Suzanne Turner, pro bono partner at Dechert LLP, who received this honor last year, will present the award.

U.S. Labor Secretary Hilda Solis, originally scheduled to provide the evening’s keynote address, is unexpectedly unable to join us. In her stead, Assistant Secretary for Policy William Spriggs will join us to honor the efforts of those working to end homelessness in America.  Laura Evans, of Washington’s Fox 5 News, will also join us as the event’s mistress of ceremonies.

Thank you to all who have helped make this event possible. We’re so excited for what is certain to be an inspirational evening.