Posted on February 2, 2012 by homelessnesslaw 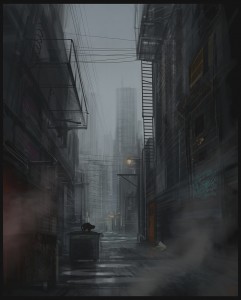 “I’ll be around. Somehow. I used to fall asleep thinking I wouldn’t wake up. Now I know better. Now I know, honey – it goes on and on and on.”

Last February, I wrote about a woman named “V.” She’s a homeless person who sat outside our K Street office for the better part of a year. I visited with her daily, and bought her lunch from time to time. She talked about the pain she was in, her addiction to alcohol, and the vicious love of her dead father. In between, she’d point out young women on the street and insist they were looking at me.

My visits weren’t noble. I can shamefully recall a few days when I took a different path to work because I didn’t have money for her. In shielding myself from her disappointment, I denied her the human contact she so dearly coveted.

I wrote before about a man she met at church. He was kind and gentle, giving her a place to stay while she got back on her feet. Her voice swelled with pride as she described looking for a job and scented shampoo. She was sober; there was such clarity to her thoughts.

But as the weeks passed, that clarity faded. The spark of life vanished from her eyes. There were bruises on her. She wouldn’t say where they came from, but I already knew. I pressed her for information about the man she was staying with.

As time went on and evidence mounted, a colleague and I pushed her to apply for emergency shelter.

“I don’t trust it. Don’t trust none of that,” V said. “I’ve never been to a shelter that didn’t have bed bugs. Got my place in line stolen by some lady once – said she’d bust me in the head if I didn’t leave. I ain’t going to no place like that.”

“What about the domestic violence hotline? Will you at least call them? Hell, we can go to the police. Or at least a hospital. I’ll take you myself.”

I put my head in my hands. I scrubbed my face with the heel of my palm. “You can’t let him keep doing this. There’s ways we can fix this,” I told her. “I can help.”

This continued for almost two months. Every now and then, when she’d finally had enough, she’d disappear for a couple days and sleep on the street. It wasn’t long, though, before he found her favorite spot to panhandle.

It was a crisp morning. The clouds cleaved the sunlight, so that it shone on us in slivers. V stood trembling while I shared a new list of shelters.

Her gaze drifted off me to the street. I tracked her eyes to a tall, heavy man, with long hair that hung over his eyes in damp strands. A cigarette dangled from his lips; his face was dotted with grime.

V looked anxious as he limped up to her. Neither of them acknowledged me.

He blew out a long puff of smoke. “You made some money?” he asked coldly. “You’re gonna start paying for your food. I been spending too much damn money on you eating.”

She nodded mutely, turning her cup toward him to reveal a few bills and some nickels. He sneered and shook his head. She averted her eyes.

Watching this provoked in me all the anger and hatred that’s a part of our potential. But there was nothing to be gained, and much to be lost, through my intervention. I forced a neutral expression.

“I expect you’ll be at home later,” he gnarled, spitting out his cigarette to grind it into the ground. He looked at me nonchalantly, holding my eyes for a long moment before he finally turned and left.

I never saw the man from church again.

In the ensuing weeks, V kept asking me to hug her. Her red-rimmed eyes were often filled with tears. All I could think was how meaningless my comfort was.

On a warm Friday in June, I wrapped up work early and headed out for the weekend. V sat slumped against a concrete barrier, staring off into the distance. She ran her tongue over her abscessed tooth, flinching.

She shrugged. After a long moment, she said: “I can’t go back there tonight. I can’t go back there no more.” Somewhere between her brain and her mouth, emotion was stripped away. She sounded placid. “I’ve gotta go somewhere else tonight. Sometimes a group of other people sleeps outside this one store. I think I’d be safe there.”

I nodded encouragingly. “I’d rather you went to a shelter, but that’s better than going home.”

Her hand swept across her face, applying more dirt than it removed.

I walked with her toward the alley where she said she often slept. Most of the walk was silent, but three separate times she pleaded with me: “You’re not gonna show anyone where my place is, are you? My place where I keep stuff? Please don’t show no one.”

I swore on my life that I never would.

She led me into the corridor between two office buildings. An amalgam of hideous odors wafted through the air. As we passed a dumpster, she said, “I used to sleep right there. But this guy would come by sometimes – said it was his place and if I didn’t leave, he’d kick my head in.”

I felt a lump in my throat at her comfortable recollection. Human beings are pragmatic. Given enough time, they can learn to live with anything.

She led me into a narrow passage between a semi-trailer and a dirty brick wall. The light of day was smothered. We were alone in the drifting dark.

When I felt the far wall, I used my phone as a flashlight, shining it on a makeshift living space beneath the semi-trailer. Lying in a pile were a tattered sleeping bag, a winter coat, and a plastic grocery bag filled with odds and ends.

“It’s a warm coat. I got it from this young lady a couple years ago. She said she’d take me to the movies, but we didn’t never go,” she recalled distantly.

“I’m sure she wanted to. Something must have come up.”

V nodded, smoothing out the coat’s wrinkles. She held it away from her body and smiled sadly. She looked down and swallowed.

“I don’t know why you help me,” she said quietly. “Why are you always helping me?”

My phone went dark. I couldn’t see her face. I was strangely conscious of all the bad I’ve done in life.

“Because I can’t think of why I wouldn’t.”

I carried her belongings to the store where she said the group of homeless persons gathered. But it was still early in the evening, and when she began arranging her sleeping bag, the store owner came out. His tired eyes darkened.

“Eight o’clock!” he growled. “You can’t be here before eight o’clock! I’ll call the cops if you don’t move.”

She had some choice words, but I gathered up her things and gently prodded her along. We found a new spot outside another store that was already closed. Another homeless person had set up camp for the night.

V laid out her sleeping bag and sat down gingerly. She looked away, not saying anything.

“Is this gonna be okay for you?” I asked.

She didn’t seem to be listening. She said again: “You’re not gonna show no one my special place, are you?”

She slowly nodded. I stood there awkwardly, until finally she turned on her side and lay her head down. I waited until she was still. She closed her eyes and slept.

It was two weeks later when I saw her again. She was sitting on the sidewalk with a book open in her lap, smiling to herself.

I found myself smiling too. “Hi, hon.”

“Hey, Andy,” she said cheerfully, holding the book up so I could see the cover. “Look at this! Do you like Motley Crue? He signed it for me!”

It was called This is Gonna Hurt, a memoir of music and photography by Nikki Sixx. On the inside cover, he’d written:

Keep going. Never give up. And don’t stop with your poetry. It’s so alive.

She talked about the piece she’d shared with him, and how proud she was that he’d enjoyed it. She started flipping through his book, picking out lyrics for me to read.

V shut her eyes and placed her hands, one atop the other, over her heart as I read a passage:

I smiled gently, handing it back to her. “That’s lovely.”

“He just knows about life. You know what I mean?”

I nodded, falling into a comfortable silence as she read another passage to herself. It was such a joy to see the blithe expression on her face that I couldn’t bring myself to ask about the man from church or where she’d been sleeping.

When she didn’t reengage, I asked softly: “Will I see you around?”

V looked up. Her smile dimmed. The whites of her eyes had a preternatural glow.

“I’ll be around,” she said, more tranquil than I’d ever seen her. “Somehow. I used to fall asleep thinking I wouldn’t wake up. Now I know better. Now I know, honey – it goes on and on and on.”

That day, I updated the Law Center’s list of policy accomplishments. Some things can sound a bit dry. “Helped create the Homelessness Prevention and Rapid Re-housing Program, which has prevented or resolved homelessness for over one million people.” But for that one day, I had complete clarity about what’s at stake. On a single night in America, 245,000 people sleep in the street, on grates, or under semi-trailers like V did. They aren’t statistics, and funding to give them homes isn’t bureaucratic waste.

I feel restless about that. I wish I’d asked about the man from church, or maybe pushed her toward a shelter again. I wish I knew where she was and what could be done for her. And I think every day about the times I went out of my way not to see her.

I think I understand now.

2 Responses to The Drifting Dark