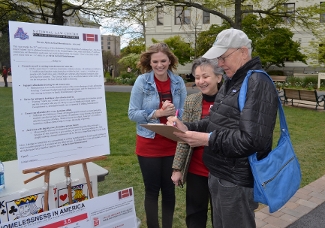 On Thursday, April 12, the Law Center kicked off its “All-In to End Homelessness” campaign, in partnership with American University’s School of Communication.

The campaign includes a solidarity drive, asking people to pledge to go “all-in” to end homelessness.  We collected more than 500 signatures at Thursday’s event (and 200 signatures online) from people pledging to treat homeless people with dignity and respect and support a common goal: finishing the job we started with the McKinney-Vento Homelessness Assistance Act.

The “All-In” campaign commemorates the Act’s 25th Anniversary – recognizing its many achievements and the work yet to be done.  The first major federal legislation to address homelessness, and for which Law Center Executive Director Maria Foscarinis was a lead advocate, McKinney-Vento has helped millions of homeless and poor Americans access housing, emergency services, and education since 1987.

But McKinney-Vento was only meant to be a first step toward ending homelessness, this national crisis persists.  In fact, it’s now growing dramatically.  We expect more than 3.5 million people will be living in public places, shelter or transitional housing in 2012 – 1.6 million of them children.  Family homelessness has increased by 20 percent since 2007.  Almost seven million people are living doubled up due to economic necessity.  And while the need for emergency serv 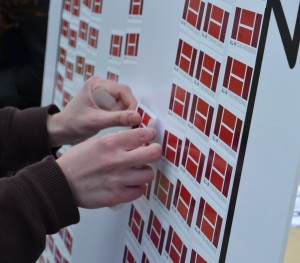 ices is rising, cities across the country are slashing budgets.

With so many Americans homeless or on the brink, we can’t wait any longer to act.  It’s time to fulfill the promise of McKinney-Vento.

The Law Center will take the “All-In” Pledge signatures to a 25th Anniversary Hill Summit on July 22, where we’ll be convening fellow advocates, Members of Congress, the media, and the public to celebrate the many accomplishments of McKinney-Vento, while laying out a vision for finally ending homelessness.