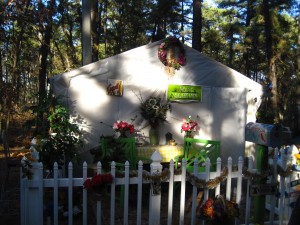 As the early spring’s plantings start to blossom in my yard, I’ve also been appreciating that the seeds for the human right to housing, some planted years ago, have also started to bloom.

In early April, the U.S. Interagency Council on Homelessness and Department of Justice issued a groundbreaking report condemning the growing trend toward criminalizing homelessness, warning that such policies “undermine real solutions” and may violate the constitutional and human rights of homeless people, including U.S. treaty obligations under the International Covenant on Civil and Political Rights and the Convention Against Torture.

This is the first time a domestic policy report has referenced our international treaty obligations, let alone saying our domestic policies might actually violate them!

We planted this seed in 2009 when our advocacy secured passage of the HEARTH Act, a requirement of which was to produce a report on criminalization.  We nurtured this by hosting numerous representatives of the Interagency Council and the Justice Department at our National Forums on the Human Right to Housing, as well as meeting with them through the Universal Periodic Review and in consultations with UN experts to discuss housing and homelessness in a human rights context.  We’re seeing a formal analysis of human rights treaties blossom as part of the government’s domestic policy discussion.

Last week, three UN human rights experts on extreme poverty, housing, and water and sanitation welcomed this domestic recognition of human rights.  “This report,” a press statement said, “could generate a tangible difference in the lives of hundreds of thousands homeless Americans.  By identifying viable and effective alternative practices and policies, it will not only assist the US Government in complying with its international human rights obligations, but also in addressing the root causes of homelessness.”

Evidence of where future blossoms may sprout comes from my trip to Eugene, Oregon, toward the end of April.  While there, at the invitation of the Eugene Human Rights Commission, I met with many local service providers, homeless persons, and advocates, as well as the mayor, city manager, three city councilors, and numerous other city staff, to discuss implementing the human right to housing at the local level.

As Eugene worked earlier this year to disperse the OCCUPY Eugene encampment, activists demanded a process to address the needs of homeless persons in the camp who had no home to go to.  They subsequently developed the Opportunity Eugene Task Force, a 58-member dialogue which produced a series of recommendations, including a recognition of the human right to housing in Eugene.  The mayor and city council are currently considering the recommendations.

So far as I’m aware, my meeting is the first time high-level city officials have sat down for two full hours to discuss the human rights implications of homelessness.  While the city has many challenges in working to implement the full recommendations of the Task Force, some are more immediately achievable, such as examining the city’s laws to ensure their enforcement does not criminalize homelessness and produce the counter-productive effects cited in the Interagency Council’s report.  Others, like creating a safe ground for homeless persons to camp without harassment and with necessary water and sanitation services, may serve as an interim step to full enjoyment of the right to housing.

There’s still much more work to be done before we can fully enjoy the fruits of our labor, with every American enjoying their basic human right to housing.  But seeing these initial blossoms inspires me to keep on cultivating, with the knowledge that those fruits are on their way.