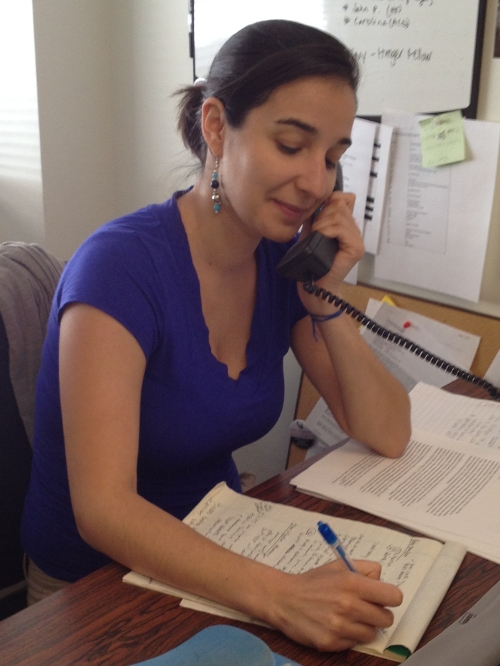 Asked to describe herself in three adjectives, Cecilia Dos Santos, the Law Center’s pro bono coordinator, responded: “Loud.  If you couldn’t tell.  I have very strong opinions.  And I like meeting and working with new people.”

Born in Buenos Aires, Argentina, raised in West Hartford, Connecticut and an alumna of Tufts University near Boston, Cecilia will return to her native land for a two-week sojourn in August.  She’s looking forward to the trip immensely, especially for the chance to visit family, including a toddler godson; however, she dislikes that the trip will take place during Argentina’s winter.

Cecilia joined the Law Center eight months ago, in October 2011, but she is not in entirely new territory.

She worked previously in the District with Law Center Legal Director Karen Cunningham, at Washington Empowered Against Violence (WEAVE). In fact, Karen was her supervisor.

Cecilia also spent time with HarborCOV, another domestic violence organization providing services in Chelsea, Massachusetts.  Cecilia emphasizes that housing was always central to her domestic violence work.  “I believe housing, along with health, is an umbrella issue under which other issues fall.  It’s easier to  keep a job, stay in school, or seek preventative medical care if you don’t have to worry about putting a roof over your head.”

With her background in direct service, Cecilia was thrilled to have the opportunity to “broaden the scope of how I was looking at housing access” in her role here at the Law Center.  “I was excited to see what is happening across the country, how all these different communities are reacting to the need for housing.  Communities have different needs, priorities—here is a chance to learn from them.”

Cecilia knows that resources from the private sector are critical to helping nonprofits affect change.  She works to manage and grow the Law Center’s LEAP (Lawyers Executive Advisory Partners) program, a network of  law firms that provide funding and pro bono legal services.  She is currently overseeing the launch of Project LEARN, a pilot program with partner DLA Piper, designed to increase access to education for homeless children.  “It’s exciting to see a clear need, like keeping homeless kids in school, and then being able to do something about it.”

Still, it is a considerable switch going from local work with individual people to coordinating pro bono projects for a national advocacy organization, and Cecilia readily confesses to missing intimate client interaction. “I do miss getting calls from clients,” she said. “Learning from them—the creative ways they find to overcome barriers.”

Cecilia is not without interpersonal interaction at the Law Center, though.  In particular, she loves overseeing and getting to know its rotating cast of interns (including this one).

Finally, although she professes a hatred for exercising, Cecilia is commonly spotted exiting the office in the evening with yoga mat in tow, en route to a power flow class.  While she “dabbled” in yoga over the years, she is proud to have maintained a consistent practice since January.  It keeps her grounded as she does her part to address homelessness and poverty.

This entry was posted in Domestic Violence and tagged direct services, staff. Bookmark the permalink.