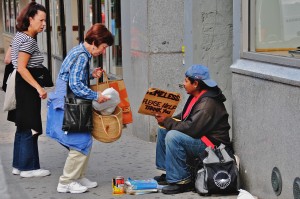 The startling trend of criminalizing the behavior of homeless persons is continuing across the country.

Despite advocacy by the Law Center, Denver has begun enforcing a ban on camping. The law defines camping as any attempt to cook or sleep in public with some form of shelter (which could be something as simple as a blanket).  Denver is treating this behavior as if it were a choice, but recent data suggests that there are approximately 200 more homeless people than shelters can house at full capacity. This new law is an outward attempt at “city beautification” at the expense of homeless people’s human rights.

Unfortunately, the Denver ordinance is not the only law that makes necessary human activities illegal.

Los Angeles and Modesto in California, Ashland in Oregon, and Frederick County in Maryland are just a few of the jurisdictions that are considering bans on sitting, sleeping, or camping in public. Philadelphia recently enacted a ban on “outdoor feeding” in city parks. This measure, which would make actions such as passing out sandwiches a crime, is similar to bans on outdoor feeding of pigeons and  is meant to force individuals who are homeless to flock to someone else’s park.

The enforcement guidelines for the Denver law state that “this ordinance does not make the status of homelessness illegal; rather, it prohibits the specific ­conduct of unauthorized camping.” However, given that sleep is a necessary human function and homeless individuals have no available shelter, for all intents and purposes, prohibiting sleeping in public and criminalizing homelessness are one and the same.

Not surprisingly, cities surrounding Denver are worried about how the ban will affect the nighttime occupation of their own park benches. Some of these cities are preparing to more strictly enforce camping bans they already have on the books. All this ramping-up of enforcement against outdoor sleeping begs the question of where they expect people who have no roofs to go once homelessness is criminalized everywhere. The only long-term solution is to increase support for people who, for a variety of reasons, do not have permanent shelter and help them move into permanent housing, rather than outlaw their very existence. Now that the Interagency Council on Homelessness and the Department of Justice released a report opposing criminalization, we are hopeful that the federal government will join us in opposing these unjust laws.

This entry was posted in Civil Rights and tagged criminalization. Bookmark the permalink.

One Response to Troubling Increase in Criminalization Laws Continues