The Return of the Rapporteur

Posted on October 31, 2012 by homelessnesslaw 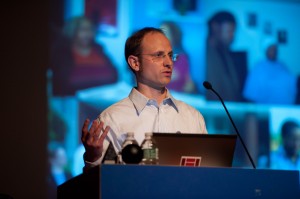 Three years to the week since her six-city mission to the U.S., the UN Special Rapporteur on the right to adequate housing, Raquel Rolnik, returned to the U.S. to present her report on the financialization of housing to the UN General Assembly.  In addition to presenting at the UN, she also presented her report at an event organized by last year’s McKinney-Vento Personal Achievement Awardee, Rob Robinson, at the CUNY Graduate Center.

The Rapporteur’s new report is impressive, analyzing the impact of the slow but sure change of the broad public conception of housing from homes designed to meet an individual’s basic needs to an investment vehicle to drive corporate profits.

For those interested in talking about housing as a human right, this report is a must-read, providing a principled framework for returning the discussion from this profit-based vision of housing to one where housing is designed to meet people’s needs.  As some of the other speakers noted, the fact that the U.S. has far more vacant homes and apartments (“people-less homes”) than homeless people demonstrates how severe the profit paradigm has become.

I was asked to speak on the legacy of the Rapporteur’s 2009 mission to the U.S.  I see this legacy existing in two major areas—the organized, educated activists she left behind, and the policy shifts catalyzed by the recommendations in her mission report– and the advocacy of said activists.

The Rapportuer’s visit was coordinated by over 70 organizations in 6 cities, as well as dozens of others who presented testimony at our National Forum on the Human Right to Housing in Washington, D.C.  In all, she heard from over 2,000 individuals.  And those individuals and organizations left with a deeper understanding of how and why it is important to talk about housing and homelessness as human rights issues in the U.S.

When the U.S. prepared for its Universal Periodic Review of human rights policy by the UN Human Rights Council, these same activists were able to participate in government consultations, successfully making housing the “number one human rights issue” brought to the government’s attention.

The Rapporteur’s report echoed the voices of the people she heard, with over 30 pages of analysis and more than 30 concrete recommendations, running the full gamut of housing issues.  Among other recommendations, and at our request, she called for the U.S. Interagency Council on Homelessness to issue a report on constructive alternatives to the criminalization of homelessness—which it did this year, in conjunction with the Department of Justice.  And thanks to her report and our advocacy, it included an unprecedented statement that criminalization not only raises constitutional concerns, but implicates U.S. treaty obligations as well.  This is the first time in history that a U.S. agency has said a domestic practice may violate international human rights standards.

We are literally changing the way our government talks about housing and homelessness.  That is the legacy of the rapporteur’s visit—a legacy we hope to continue growing.

We look forward to working with the Rapporteur on her new report on the security of tenure, and continuing to use her previous reports to help us return our national dialogue to the core belief that housing is a human right and implement the policies to realize it.