Posted on December 3, 2012 by homelessnesslaw 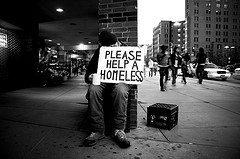 Over the last few years, policymakers across the country have cracked down on homeless Americans, introducing measures that make life an even greater struggle for some of our most vulnerable citizens.  These include laws that prohibit sleeping or storing belongings in public areas.  Out of 234 U.S. cities surveyed in 2011, one-third prohibited sitting/lying in certain public places.  These “sidewalk bans” are not only morally abhorrent, but highly ineffective at addressing homelessness.

This past November, Berkeley, CA came uncomfortably close to passing a sidewalk ban that would have fined homeless individuals $75 for sitting on sidewalks in commercial areas between 7 a.m. and 10 p.m.  The Berkeley Sit-Lie Ordinance—“Measure S” on the Election Day ballot—was narrowly defeated 52.5 percent to 47.7 percent.

Drafters of Measure S framed it as beneficial to all, “finding” that “public spaces in commercial districts have become increasingly inhospitable due to groups of individuals, often with dogs, having created encampments on sidewalk areas on our commercial streets…[resulting] in litter, debris, and waste left on our sidewalks.”  The choice to use the pronoun “our” is notable, as it distances the voter from the “groups of individuals” (homeless persons) occupying sidewalks.

This argument resonated with some members of the business community.  One proponent—John Carter, CEO of the Downtown Berkeley Association—said the ban would “shoo homeless people away from the city’s main commercial districts,“ and claimed that “[businesses]’ve had a hard time renting out here because the scene out there has had a real chilling effect.”

The city has a history of similar ordinances and attitudes.  In 1995, voters passed Measure O, an anti-panhandling and sit-lie ordinance.  The American Civil Liberties Union and other homeless advocates challenged the measure, securing an injunction that ultimately led the Administration to drop the ordinance from its agenda.

For almost 20 years, we’ve watched criminalization laws proliferate without any evidence of their effectiveness.  And over that same period, the Law Center has pushed for constructive alternatives that get homeless persons off the streets while saving taxpayers money.  Those efforts are gaining momentum.

Earlier this year, and at the Law Center’s urging, the U.S. Department of Justice and U.S. Interagency Council on Homelessness co-published a report condemning criminalization policies.  And following advocacy by the Law Center and its partners (the Rhode Island Coalition for the Homeless and Rhode Island Homeless Advocacy Project), Rhode Island became the first state to pass a “Homeless Bill of Rights.”  Other states are taking notice.  Just yesterday, a similar bill to Rhode Island’s was introduced into the California State Assembly.

We’ve got a long way to go, but with so many cities criminalizing homelessness, these are important steps forward in our ongoing battle to protect and enforce homeless persons’ rights.

One Response to The Compassion Deficit: Sidewalk Bans and Criminalizing America’s Homeless