Posted on April 8, 2013 by homelessnesslaw

As the economic crisis continues at the bottom end of the income spectrum, the past week has brought two victories worth noting, from the most humble of tent encampments to the marble halls of the U.N.’s Palais Wilson in Geneva.

First, our colleagues at the New Jersey Coalition for the Homeless have won a tremendous court victory for those living in Tent City, Lakewood, New Jersey. After fighting the city and county’s efforts to evict them for several years, and pushing, through counter-motions, an alternative vision of the law that says the state was violating their human right to housing (helped, in small part, by assistance from the Law Center), the homeless residents of Tent City have come to a settlement with the city that states, among other things, that  (1) all of Tent City’s current residents may not be ejected by Lakewood unless and until those residents are first offered a plan that provides for (and actually provides) safe and adequate housing for at least a full year; (2) requires Lakewood to dismiss all of the charges that it filed in municipal court and elsewhere about supposed “code violations” in Tent City; and (3) requires the city to provide basic municipal services such as trash removal for the residents until they depart. As Jeffery Wild, lead attorney for the homeless residents said,

“No one can be forced out of where they are now unless they are offered safe and adequate housing indoors. That’s all we ever wanted. We’re not here to defend Tent Cities; no one should have to live in the woods. This is about the right of everyone to have housing.” 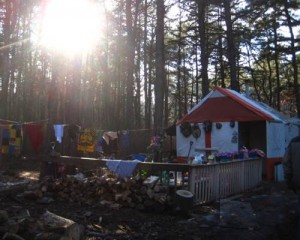 Jeff and his legal team have demonstrated the concrete impact that human rights advocacy has at the local level, while we continue to build global standards to further assist in ensuring all people enjoy their basic human rights. While there are more battles to be fought, we celebrate the victories of this past week, and look forward to the day when we no longer need to fight criminalization of homelessness, because everyone has a safe place to call home.