Joint Positions Are a Reason for Hope

A congressional briefing held May 22, Homelessness in America: Experiences and Solutions, attracted an overflow crowd of Hill staffers and advocates. For me, it was a bright spot in an otherwise gloomy landscape in Washington, DC. 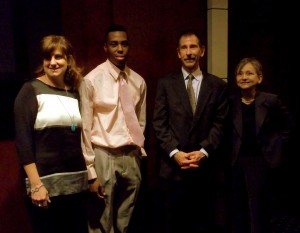 I was inspired by the co-chairs of the Congressional Caucus on Homelessness, which sponsored the event, Rep. Eddie Bernice Johnson and Rep. Alcee Hastings, together with Senator Patty Murray; by their dedicated staffs; by my fellow panelists; and by the members of the Homeless Advocates Group that supported the event and developed the united policy proposals that I presented.

Devin Johnson, a high school senior in Prince George’s County who was homeless with his family for four years, detailed the physical hardship he experienced living in a tent in the woods, his shame and efforts to hide his circumstances from his classmates, his efforts to protect his little sister, his pride in his upcoming graduation on the honor roll and plans to join the Navy, and his hopes of a better future.

Carmela DeCandia, the new Executive Director of the National Center on Family Homelessness, backed up Devin’s moving testimony with powerful research documenting the tremendous harm inflicted by housing instability on children and families. Long-time local activist Brian Carome, now Executive Director of Street Sense, Washington D.C.’s street newspaper, spoke about the pain of witnessing the transformation of homelessness from a rare phenomenon into a widespread problem that is often seen as intractable and inevitable.

All of us at NLCHP believe and know that homelessness can and must be solved. That was clear in the remarks of panelists, and it was the focus of mine. Allowing homelessness to continue in a country that has the resources, like ours does, to ensure the basics for everyone violates fundamental human rights. It is also expensive, wasting not only lives, but also money. Homelessness is not a disease that we don’t know how to cure; it is not a mystery that we don’t know how to solve.

We know the solutions: increased resources for affordable housing; increased resources for and access to education and health care; personal incomes adequate to pay for the necessities of life; and protection from criminalization, violence and other civil rights violations. These are the solutions outlined in more detail in the joint policy proposals developed by the Homeless Advocates Group, a coalition of national advocates working on issues of homelessness and poverty. Along with the packed room, I see those joint positions are a reason for hope. United, we can and will push for real change until we achieve it.

This entry was posted in Housing, Human Rights. Bookmark the permalink.

2 Responses to Joint Positions Are a Reason for Hope