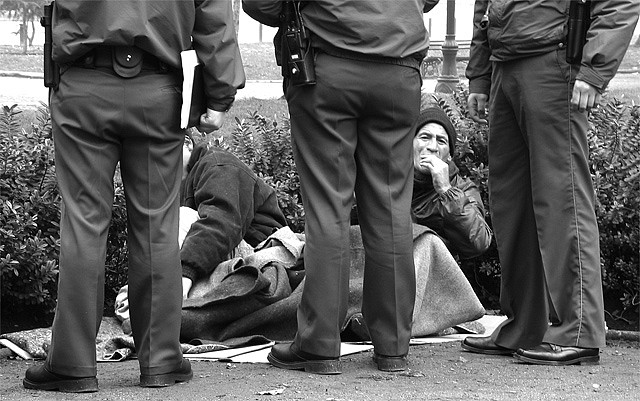 Homelessness is an ongoing crisis in the U.S., affecting upwards of 3 million Americans every year, and plaguing communities from coast to coast. At the core of this crisis is a nationwide lack of affordable housing. Adequate affordable housing units are only available to about one third of the millions of extremely low-income renters that need them. Further, there is a severe lack of temporary shelter space to meet the emergency needs of those priced out of the housing market, with fewer
shelter beds than homeless people in the vast majority of U.S. cities. As a result, many people are left with no place to live but outdoors and in public spaces.

Homeless people who are forced to live outside on sidewalks, in parks, under bridges, or in other public spaces have no choice but to perform life-sustaining activities, such as eating, sleeping, and sitting down, in the public view. Despite this reality, many states and localities have passed and enforced laws treating these basic, necessary acts by homeless individuals as crimes.

In 2011, the Law Center assessed the scope of this criminalization, reviewing laws in 234 U.S. cities and surveying 154 service providers, advocates, and people experiencing homelessness in 26 states. We found that half of the cities prohibit sleeping or camping in particular public places, and one quarter have city-wide prohibitions on sleeping or camping. The effect of these bans is that more than half of the individuals surveyed reported arrests or citations for camping or sleeping in public. Further, one third of the cities prohibit even simply sitting down or lying down in certain public places, and about one in five individuals reported arrest or citation for sitting on a public sidewalk.

Laws that criminalize homelessness are often designed to mask visible homelessness, rather than address the root causes of the problem. These bad public policies are ineffective, exacerbating rather than reducing the problem. The misuse of the criminal justice system wastes precious public resources, crowds local jails, and clogs the court system – all at the expense of taxpayers.

This post begins our new blog series, Countering Criminalization. Over the next several weeks, we will discuss the criminalization of homelessness from two perspectives.

First, we will explore the legal problems associated with these ineffective criminalization laws in Constitutional Challenges. Courts have found that laws punishing camping, sleeping, sitting, or storing personal property in public places may run afoul of the First, Fourth, Eighth, and Fourteenth Amendments to the U.S. Constitution, making them unconstitutional violations of homeless persons’ civil rights.

Then, we’ll discuss positive solutions in Constructive Alternatives, examining solutions that have proven successful in communities across the nation.

Please join us over the next several weeks as we explore the criminalization of homelessness in depth.