Top 5 threats to people experiencing homelessness: what the Trump election could mean to the most vulnerable

Posted on December 19, 2016 by homelessnesslaw

People experiencing homelessness, or who are at risk of homelessness, are amongst the most marginalized and vulnerable people within our communities. And the issues related to homelessness do not always fall along partisan lines. Here’s what you need to know about the upcoming transition and the top 5 threats facing people experiencing, or at risk of, homelessness. Please use this information to advocate with your representatives in government!

Homelessness is not inevitable; in fact, the most important cause of homelessness is lack of affordable housing. To put it simply, wages are not sufficient to afford housing for far too many in our communities.

Massive cutbacks to federal housing funding in the early 1980s have never been restored —resulting in the crisis of homelessness we see now. Today only 1 out of 4 income-eligible renters receive assistance. But while Trump’s Campaign did not outline a housing plan, he committed to increase defense spending while 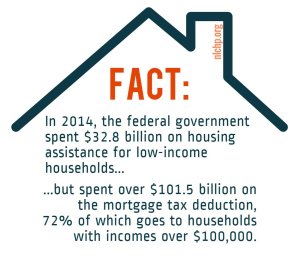 lowering taxes and balancing the budget, which could mean further cuts to housing and other anti-poverty programs. In addition, Mr. Trump has said he wants to cut non-defense spending by 1% every year, which would be devastating to affordable housing programs including Section 8 vouchers, public housing, and project-based rental assistance which need toincrease every year just to keep pace with inflation.

This is consistentwith House Speaker Ryan’s proposed anti-poverty agenda, which could include welfare reform-type changes such as work requirements and time limits to all anti-poverty programs, and block-granting of more funds (which can allow anti-poverty funding to be used for other things, like building roads). Congress is also already drafting comprehensive tax reform bills that dramatically lower corporate and individual tax rates by reducing or eliminating tax expenditures and credits, threatening the Low Income Housing Tax Credit program.

Trump’s nominee for Secretary of the U.S. Department of Housing and Urban Development (HUD), retired surgeon Ben Carson, has no experiencing in housing policy, so the nominations for Assistant Secretary positions at HUD could be particularly important.

Threat 2: Reversal of efforts to stop the criminalization of homelessness

The Justice Department filed a statement of interest brief in 2015 in a Law Center case, Bell v. Boise, arguing homeless people should not be punished for sleeping in public when they have no alternative and issued guidance in 2016 advising communities to stop putting people in jail for inability to pay fines and fees. The U.S. Department of Housing & Urban Development incentivized constructive, non- 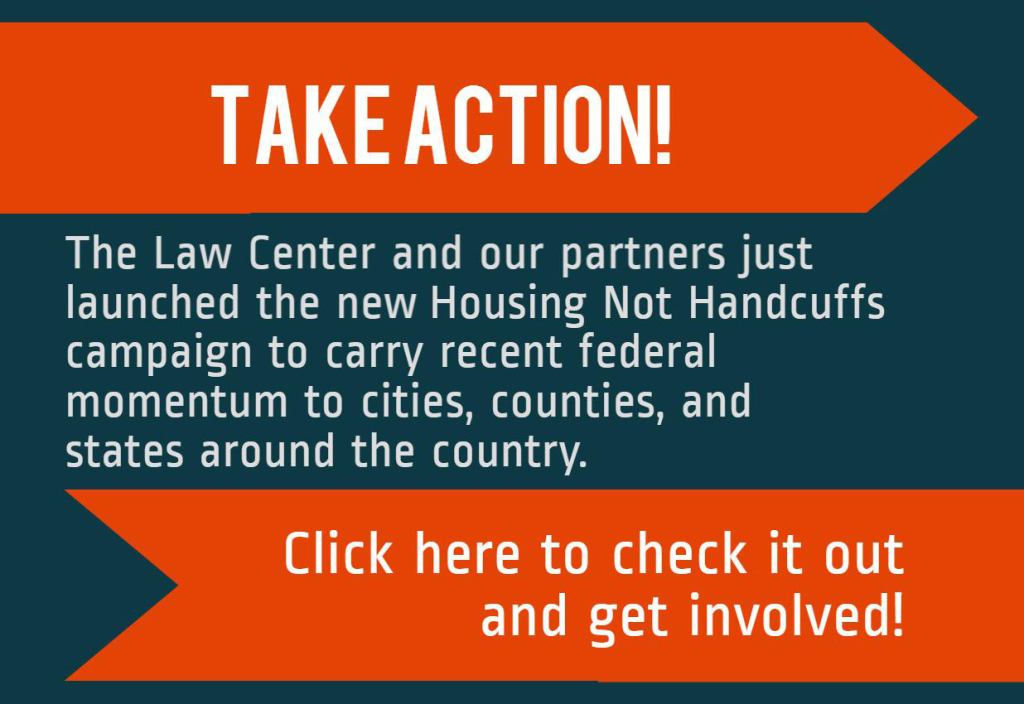 criminalization responses to homelessness in its 2015 and 2016 funding applications for homeless programs. And the U.S. Department of Education and the U.S. Interagency Council on Homelessness released important guidance advising local governments to move away from criminalization.

Trump’s nomination of Senator Jeff Sessions for the position of U.S. Attorney General does not bode well for these efforts. Sessions has been an opponent of criminal justice reform.

Housing discrimination and segregation in our communities both contribute structurally to homelessness. Earlier in his professional career Trump was accused of violations of the Fair Housing Act. Ben Carson, Trump’s nominee for HUD Secretary is on record on only one housing policy: calling HUD efforts to undo segregation “social engineering.” This is a particularly inappropriate characterization since HUD’s legacy of creating segregation in the early half of the twentieth century is one of the strongest examples of social engineering available.

Concerns are also raised by Trump’s nomination of Senator Jeff Sessions to the position of U.S. Attorney General. Senator Sessions voted against reauthorization of the Violence Against Women Act in 2013, as well as against a number of other civil rights laws. He has spoken out against the Voting Rights Act, opposed bipartisan immigration reform, and supported a constitutional amendment to ban same-sex marriage. Sessions also has criticized judicial nominees with civil rights backgrounds, and voted against Justices Sonia Sotomayor and Elena Kagan and Attorney General Loretta Lynch. In 1986, the Senate Judiciary Committee rejected Sessions’ nomination to serve as a federal judge based on his record opposing civil rights as well as evidence of racist comments in the workplace as an Assistant U.S. Attorney. 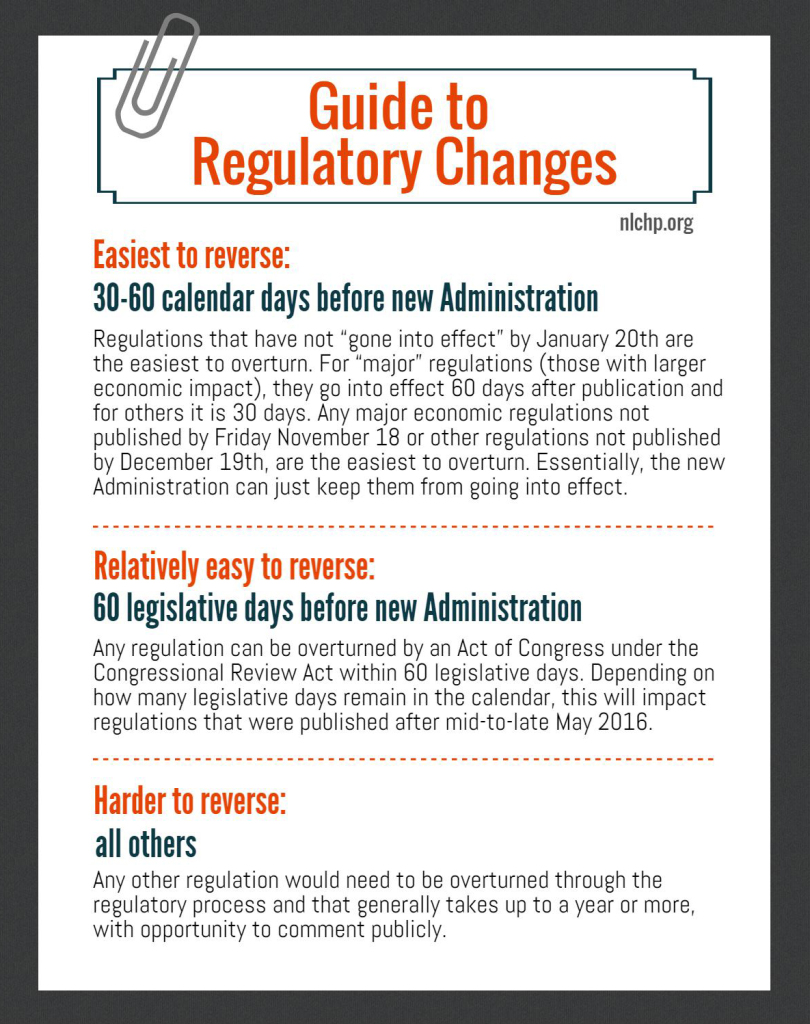 HUD’s efforts to rectify segregation, the federal government has recently release a number of civil rights regulations and guidance that help to prevent and end homelessness, as well as make our housing market fairer. These include guidance and regulations to protect access to housing for victims of domestic violence; two regulations to ensure equal access to HUD housing regardless of marital status, sexual orientation, or gender identity; guidance on criminal records and housing; guidance on discriminatory zoning ordinances; and more.

School stability is so vital for children experiencing homelessness, a fact recognized by the federal McKinney-Vento Homeless Act, recently reauthorized in the 2015 Every Student Succeeds Act (ESSA).

Through his proposed nomination of Betsy DeVos as Secretary of Education, Trump has signaled a potential new emphasis on vouchers and charter schools. This raises fears about any shift of federal funds away from public school districts to for-profit and private schools. These funding shifts can make it more difficult for public schools to provide children experiencing homelessness their right to a decent, stable education. A shift in emphasis 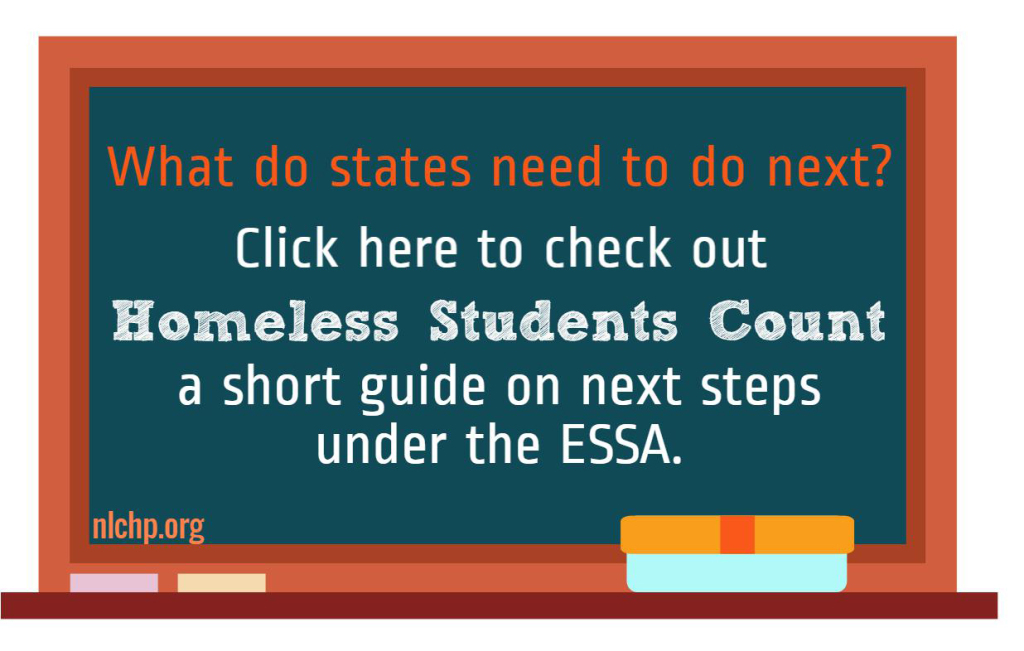 could also make it more difficult for families and advocates to enforce rights promised by federal law. Charter schools are covered by McKinney Vento, but have high rates of non-compliance and are more difficult to monitor. More charter schools across the country, means greater need for oversight.

Threat 5: Repeal of, or change to, Affordable Care Act and Medicaid

The Affordable Care Act, or Obamacare, by providing health insurance to 20 million Americans, has prevented medical expenses from resulting in homelessness for countless families. It also has improved health access for people currently experiencing homelessness.  According to a recent study, in states that expanded Medicaid, providers saw gains in health insurance among people who are homeless.

Trump and other Republicans have indicated repealing Obamacare is one of their highest priorities, but have not shared what would come after. Trump’s nominee for Secretary of the U.S. Department of Health and Human Services, Representative Tom Price, previously introduced the Empowering Patients First Act, which involved age-adjusted tax credits to help people buy insurance as well as increased reliance on health savings accounts and high-risk pools at the state level and would have allowed people to opt out of Medicare, Medicaid or Veterans Affairs benefits and receive the tax credit to buy an individual plan. Similarly, House Speaker Ryan has indicated his desire to move away from Medicare to healthcare vouchers. Both steps will almost certainly result in more people with no or inadequate medical insurance and therefore increased housing instability and homelessness.